Nevada is transforming communications capabilities for first responders across the Silver State. 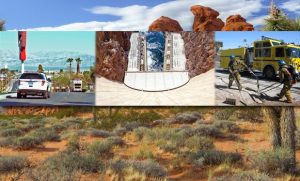 CARSON CITY, Nev., Aug. 17, 2017 – Nevada is transforming communications capabilities for first responders across the Silver State. Today, Governor Brian Sandoval announced his decision to accept the FirstNet and AT&T plan to deliver a wireless broadband network to the state’s public safety community. This will make Nevada the 15th state or territory to bring advanced technologies to its first responders, helping them save lives and protect communities.

“Public safety is of the highest concern,” said Governor Sandoval. “Increasing the safety of our residents, visitors and first responders through FirstNet was the right choice. From volunteer emergency responders in rural communities to those on the front lines in populous areas, our public safety community deserves access to the cutting-edge technologies they need to get the job done.”

AT&T, in a public-private partnership with FirstNet, will build, operate and maintain a highly secure wireless broadband communications network for Nevada’s public safety community at no cost to the state. The FirstNet network will drive innovation and create an entire system of modernized devices, apps and tools for first responders.

Governor Sandoval’s decision to opt in is both economical and technologically advanced. The FirstNet network will transform the way Nevada’s fire, police, emergency medical services (EMS) and other public safety personnel communicate and share information. Specifically, FirstNet and AT&T will:

Create an efficient communications experience for public safety personnel in agencies and jurisdictions across the state. This will support emergency response during natural disasters like the devastating floods in Washoe, Douglas and Elko counties, as well as seasonal wildfires recently impacting the community.

Expand network coverage from the populous Las Vegas Valley to the mountainous regions of Northern Nevada and the rural landscape in between. This will benefit first responders and residents alike.

Drive infrastructure investments and create jobs across the state.

Usher in a new wave of innovation that first responders can depend on. This will create an ever-evolving set of life-saving tools for public safety, including public safety apps, specialized devices and Internet of Things technologies. It also carries the potential for future integration with NextGen 9-1-1 networks and Smart Cities’ infrastructure.

“Public safety is our priority and, starting today, we’re embarking on a program that will change the face of how we communicate statewide,” Sergeant Mike Edgell, Nevada Highway Patrol, said. “The partnership with FirstNet and AT&T brings new technologies supported by a first-rate network dedicated to emergency responders to enhance our capabilities during a crisis. It will also be a helpful tool in the normal course of business and during large scale events.”

FirstNet and AT&T worked with the Nevada Public Safety Communications Committee to design a network solution with direct input from the state and its public safety community. This helped to address their unique communications needs, like connecting local, state and federal responders seamlessly across jurisdictions in every emergency, large or small.

“Governor Sandoval’s decision to join FirstNet demonstrates his strong commitment to public safety,” said FirstNet CEO Mike Poth. “This decision puts 21st century technology over a modern, broadband platform in the hands of the state’s first responders, giving them access to the speed, bandwidth and priority services they need. FirstNet looks forward to continued efforts with public safety to ensure this network is built to meet their unique needs across the state – from remote locales to populous cities.”

The decision enables FirstNet and AT&T to begin creating an entirely new wireless ecosystem for public safety communications. Nevada’s first responder subscribers will have immediate access to quality of service and priority to voice and data across the existing nationwide AT&T LTE network.

“Fire, police and EMS put their lives on the line every time they put on a uniform,” said Chris Sambar, senior vice president, AT&T – FirstNet. “With Governor Sandoval’s decision, he’s giving Nevada’s brave men and women access to the innovative communications tools they need to complete their life-saving mission. It’s an honor to connect Nevada’s public safety community to the technologies they deserve.”