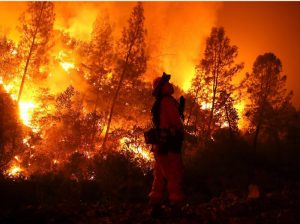 Verizon Wireless’ throttling of a fire department that uses its data services has been submitted as evidence in a lawsuit that seeks to reinstate federal net neutrality rules.

Bowden’s declaration was submitted in an addendum to a brief filed by 22 state attorneys general, the District of Columbia, Santa Clara County, Santa Clara County Central Fire Protection District, and the California Public Utilities Commission. The government agencies are seeking to overturn the recent repeal of net neutrality rules in a lawsuit they filed against the Federal Communications Commission in the US Court of Appeals for the District of Columbia Circuit.

Florida city turns to AT&T, FirstNet for connectivity during aftermath of Hurricane Michael

Be the first to comment on "Verizon throttled fire department’s “unlimited” data during Calif. wildfire"