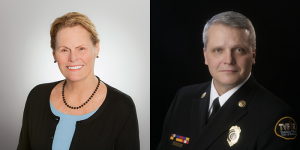 Swenson and Johnson have both submitted formal letters of resignation to U.S. Secretary of Commerce Wilbur Ross and notified Assistant Secretary of Commerce David Redl—who also serves as the administrator for the National Telecommunications and Information Administration (NTIA), which houses FirstNet within the U.S. government—according to an NTIA press release issued today.

“Secretary Ross and I are grateful for the leadership that Sue Swenson and Jeff Johnson demonstrated in leading FirstNet from a true startup to nationwide deployment,” Redl said in a prepared statement. “We are deeply appreciative of their commitment to public safety and service to their country. The Department and FirstNet have identified talented, experienced candidates for the FirstNet board that will carry on Sue and Jeff’s good work. We look forward to announcing those appointments later this year.”

Honoring first responders: the heroes among us

Be the first to comment on "FirstNet Chair Sue Swenson, Vice Chair Jeff Johnson resign from authority’s board"