Chief Cassell says despite FEMA’s report on 1 October, which recommends FirstNet, it was already on the department’s radar because of its benefits. 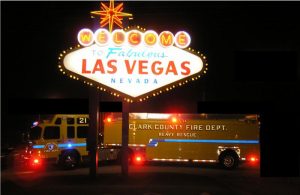 From wildfires on Mount Charleston, and flooding in the valley, to shootings on the Las Vegas Strip and dangerous crashes on major roadways; a new broadband network is meant to help first responders save lives during all those situations with more efficient communication.

It’s called FirstNet.  In a report regarding 1 October released earlier this week, FEMA recommended it for public safety departments here in the valley.

Be the first to comment on "New network, ‘FirstNet,’ to offer first responders more efficient communication"