“Modernizing our communications infrastructure will allow our courageous first responders to coordinate and respond more quickly, effectively, and safely, creating better outcomes for them and the communities they serve.” 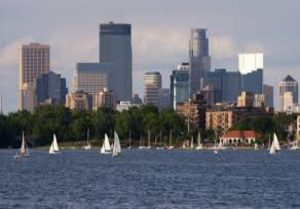 “First responders across our state risk their lives every day to protect and serve the people of Minnesota,” said Governor Dayton. “Modernizing our communications infrastructure will allow our courageous first responders to coordinate and respond more quickly, effectively, and safely, creating better outcomes for them and the communities they serve.”

AT&T, in a public-private partnership with FirstNet, will build, operate and maintain a highly secure wireless broadband communications network for Minnesota’s public safety community at no cost to the state. The FirstNet network will drive innovation and create an entire system of modern, life-saving devices, apps and tools for first responders.

“Governor Dayton’s decision to launch FirstNet in Minnesota will dramatically enhance police work across the state by giving law enforcement access to the most advanced communications capabilities available today,” says FirstNet Board Member Richard Stanek, who has served as the Sheriff of Hennepin County since 2007. “It will also modernize communications used by fire, EMS, and other public safety personnel, which will help all first responders maintain the safety of our neighborhoods and communities.”

The FirstNet network will transform the way Minnesota’s fire, police, EMS and other public safety personnel communicate and share information. Specifically, it will:

Connect first responder subscribers to the critical information they need in a highly secure manner when handling day-to-day operations, responding to emergencies and supporting large events like championship sporting events.
Create an efficient communications experience for public safety personnel in agencies and jurisdictions across the state during severe weather events, including heavy rain and snow, tornadoes and high-velocity, straight-line winds.
Enhance and expand network coverage across Minnesota’s diverse landscape, benefitting first responders and residents throughout the state’s rural areas, across Minnesota’s vast plains, in wilderness areas and around its many lakes and waterways.
Usher in a new wave of dependable innovations for first responders. This will create an ever-evolving set of life-saving tools for public safety, including public safety apps, specialized devices and Internet of Things technologies. It also carries the potential for future integration with NextGen 9-1-1 networks and Smart Cities’ infrastructure.

FirstNet and AT&T designed Minnesota’s network solution with direct input from the state and its public safety community, helping to address the state’s unique communications needs. This includes:

Extending coverage to first responders in rural areas and improving coverage along Minnesota’s border with Canada.
Using the FirstNet platform to drive innovation in public safety applications.
Providing first responders with access to dedicated network assets that can be deployed for additional coverage and support when needed.
“Governor Dayton’s decision to join FirstNet will enhance public safety communications throughout the state,” said FirstNet CEO Mike Poth. “This network will connect first responders operating across Minnesota, from the populous centers of the Twin Cities to remote areas near the Canadian border. FirstNet and AT&T are pleased to have delivered a plan that meets Minnesota’s unique needs, and we look forward to bringing the network to public safety throughout the Land of 10,000 Lakes.”

The decision enables FirstNet and AT&T to begin creating an entirely new wireless ecosystem for public safety communications. Minnesota’s first responder subscribers will have immediate access to quality of service and priority to voice and data across the existing nationwide AT&T LTE network.

“We congratulate Governor Dayton on taking the first steps necessary to provide our state’s public safety community with the cutting-edge technologies they need to protect Minnesotans,” said Paul Weirtz, president, AT&T Minnesota. “AT&T is honored to bring FirstNet to Minnesota. We are proud to already have the most wireless coverage in Minnesota. And we are excited to strengthen our network coverage across the state to provide first responders with the innovative communications tools they deserve to carry out their life-saving mission.”

Have an idea for an app to assist first responders in the field?

Collaboration is Key for Interoperability in National Capital Region