“This initiative puts Michigan at the forefront once again for public safety and public service.” 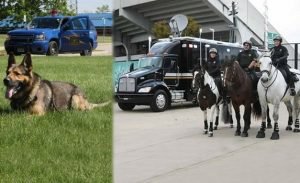 RESTON, Va., August 3, 2017 – On behalf of Governor Rick Snyder, Lt. Gov. Brian Calley is transforming communications and driving innovation for Michigan’s first responders by “opting in” to FirstNet. With his decision, FirstNet and AT&T will deliver a specialized wireless broadband network to Michigan’s public safety community. This will make Michigan the 10th state or territory in the country to bring first responders advanced technologies that will help them save lives and protect communities.

“This initiative puts Michigan at the forefront once again for public safety and public service,” Lt. Gov. Calley said. “The ability for public safety agencies to communicate is critical in an emergency. The enhanced capabilities offered by FirstNet and AT&T will help ensure that those risking their lives for our safety have the tools they need. This effort also will enhance the availability of broadband service across many rural areas of the state, something that Governor Snyder and I continue to focus on as a priority for Michigan residents.”

AT&T, in a public-private partnership with FirstNet, will build, operate and maintain a highly secure wireless broadband communications network for Michigan’s public safety community at no cost to the state for the next 25 years. The FirstNet network will drive innovation and create an entire system of modernized devices, apps and tools for first responders.

The Governor and Lt. Governor are making one of the most economical and technologically advanced decisions for the state’s first responders and the residents they serve. The FirstNet Network will transform the way Michigan’s fire, police, EMS and other public safety personnel communicate and share information. Specifically, FirstNet and AT&T will:

Connect first responder subscribers to the critical information they need in a highly secure manner when handling day-to-day operations, responding to emergencies and supporting large events like football games at Michigan Stadium that draw crowds of more than 100,000 people.
Create an efficient communications experience for public safety personnel in agencies and jurisdictions across the state during natural disasters. This includes severe weather similar to the August 2014 record-setting rainfall that caused extensive flooding in Detroit and its surrounding communities.
Enhance network coverage in rural areas. This will benefit first responders and residents throughout Michigan. First responders will also have access to dedicated network deployables for additional coverage and support when needed.
Drive infrastructure investments and create jobs across the state.
Usher in a new wave of innovation that first responders can depend on. This will create an ever-evolving set of life-saving tools for public safety, including public safety apps, specialized devices and Internet of Things technologies. It also carries the potential for future integration with NextGen 9-1-1 networks and Smart Cities’ infrastructure.
“Much of the state of Michigan is rural in nature and presents many communication challenges,” said Michigan State Police Director Col. Kriste Kibbey Etue. “Effective and robust communication capabilities are critical to all public safety officials and the citizens we serve.”

The FirstNet solution that will be built in Michigan was designed with direct input from the state’s public safety community. FirstNet has been meeting with Michigan officials and public safety personnel for several years to address their unique communication needs. This includes:

Expanding coverage in rural and tribal areas as well as along Michigan’s waterways and shorelines
Helping address communications challenges along the state’s border with Canada, including key ports and border crossings
“The Governor and Lieutenant Governor’s decision to join FirstNet comes after the state considered a number of options to get the best solution for public safety,” says FirstNet CEO Mike Poth. “FirstNet and AT&T are extremely pleased to have delivered the network plan that best meets Michigan’s unique needs. We look forward to connecting first responders across the Wolverine State’s diverse landscape – including its rural and tribal areas, as well as federal lands, border crossings and waterways.”

The decision enables FirstNet and AT&T to begin creating an entirely new wireless ecosystem for public safety communications. Michigan’s first responder subscribers will have immediate access to quality of service and priority to voice and data across the existing nationwide AT&T LTE network.

“Michigan issued a comprehensive RFP, and the governor and lieutenant governor ultimately decided that FirstNet and AT&T are best positioned to deliver the coverage, value and experience that the state’s public safety community expects,” said Jim Murray, president of AT&T Michigan. “It’s an honor to serve Michigan’s fire, police, EMS and other public safety personnel. It’s our mission to help these brave men and women carry out their important mission.”

Public Safety Advocate: FirstNet Needs to Come Out of the Closet!