Oakland County Sheriff Michael Bouchard said Monday his department will be the first in Michigan and one of the first in the nation to equip officers with FirstNet, a communications tool that can save lives. 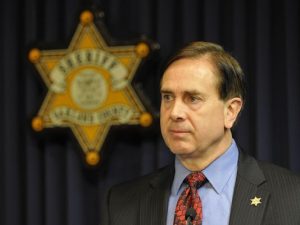 According to a news release from the sheriff’s office, with FirstNet, Oakland County law enforcement will no longer have to compete with commercial users for bandwidth when an emergency happens.

Instead, Oakland County police can use the power of priority and preemption — two mission-critical features that FirstNet enables — to confidently communicate and coordinate whenever they need to.

Bouchard said FirstNet — which has been in development since the 9/11 terrorist attacks and demonstrates how police and fire were often unable to communicate with one another — will allow law enforcement and the public sector to “keep pace with the private sector.”

The service is also expected to reduce current telephone service charges for the county by about 20 percent, Bouchard said.

“FirstNet is the exclusive communications platform built with AT&T for public safety, inspired by public safety — there is no substitution for this network that they fought for,” First Responder Network Authority CEO Mike Poth said in a statement. “We look forward to supporting the Oakland County public safety community’s use of FirstNet, making sure it delivers what they need when they need it.”

Be the first to comment on "Oakland Co. among first with new communications tech"