At a recent national gathering of police commanders and telecommunications executives, one executive lamented: “What company sends its employees into the field without a smartphone? Cops do. They give them to commanders, detectives, supervisors, but not officers.” 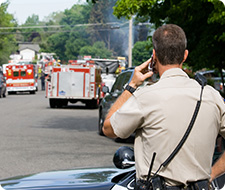 Many police officers, firefighters and paramedics carry their own smartphones to do the things their department-issued equipment can’t. But now, 16 years after the terrorist attacks of Sept. 11, 2001, exposed the inability of American first responders to talk to each other, a nationwide cellular network called “FirstNet” is launching to give public safety employees the ability to send data, video and text to each other. When a crisis hits and cell towers are overwhelmed, calls from first responders will preempt calls made by the public. FirstNet is expected to be operational by March.

Congress established the First Responder Network Authority after reports that firefighters and police officers were unable to communicate at the World Trade Center and the Pentagon after the Sept. 11 attacks. But the idea of placing all public safety agencies on one interoperable broadband network took off after AT&T was awarded a wireless spectrum that will provide the bandwidth for the project and then committed to spending $40 billion to build new facilities and provide security for it.

Public Safety Advocate: Opting In or Out?

What FirstNet means for the future of Land Mobile Radios

Be the first to comment on "FirstNet, Broadband Network To Enable Police And Fire Responders To Talk To Each Other, Ready To Launch"