AT&T also views the LTE drone as an essential part of the nationwide public safety network that it is currently building under contract with the federal government, the FirstNET 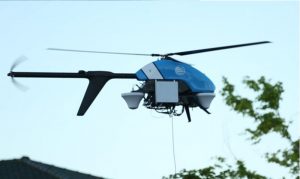 After suffering the wrath of two of the most catastrophic Atlantic hurricanes ever to hit North America, Puerto Rico is struggling mightily. Over a month after Hurricane Maria devastated the island, towns and communities are still without power, and 48% percent of cell sites remain out of service. However, to help Puerto Rican customers communicate with their loved ones, AT&T deployed its flying COW drone to provide temporary cell service.

“IN PUERTO RICO, WE’VE DEPLOYED OUR HELICOPTER FLYING COW (CELL ON WINGS) FOR THE FIRST TIME EVER.” ~AT&T

The company went on to say that this is the first time that a drone of this kind has been used successfully.

“As we work to permanently restore our network, this experimental technology is providing data, voice, and text services to customers. This is the first time an LTE cell site on a drone has been successfully deployed to connect residents after a disaster.”

The flying COW drone was introduced by AT&T in February this year. Back then, the company reported that their drone team just completed the first successful live test flight of the alleged “cell site on a drone.”