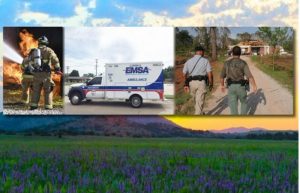 “Today Oklahoma will take the necessary steps forward to provide a wireless broadband network to our dedicated first responders. I am pleased to be able to opt in and provide a more effective and efficient network to those people who support our citizens in times of need,” said Governor Fallin.

AT&T, in a public-private partnership with FirstNet, will build, operate and maintain a highly secure wireless broadband communications network for Oklahoma’s public safety community at no cost to the state. The FirstNet network will drive innovation and create an entire system of modernized devices, apps and tools for first responders.

Following an in-depth evaluation of the proposed AT&T and FirstNet plan, as well as proposals by other potential vendors, Oklahoma selected the FirstNet and AT&T public-private partnership, bringing public safety the overall best value solution with the least risk.

FirstNet will transform the way Oklahoma’s fire, police, EMS and other public safety personnel communicate and share information. Specifically, it will:

Connect first responder subscribers to the critical information they need in a highly secure manner when handling day-to-day operations, responding to emergencies and supporting large events like the Oklahoma and Tulsa State Fairs, each attracting one million visitors annually, or collegiate football games that average over 85,000 fans each game.
Create an efficient communications experience for public safety personnel in agencies and jurisdictions across the state when responding to major natural disasters that occur in Oklahoma all year round, such as severe winter storms, tornadoes, high winds and flooding.
Increase public safety coverage across the state and connect public safety subscribers nationally, providing modern communications and data sharing, helping to increase the safety of first responders.
Enhance and expand network coverage throughout Oklahoma’s diverse landscape, from densely populated metro areas to rural areas and tribal lands.
Provide first responders with access to dedicated network assets that can be deployed for additional coverage and support when needed.
Drive infrastructure investments and create jobs across the state.
FirstNet and AT&T designed Oklahoma’s network solution with direct input from the state’s public safety community, including the Oklahoma Public Safety Broadband Network Governance Committee. By working closely with the Governance Committee, FirstNet and AT&T crafted a plan to meet Oklahoma’s unique communications needs, including:

Expanding coverage beyond what’s achieved today in rural and tribal areas, and in the northeast portion of the state.
Making devices available through various options, including a Bring Your Own Device (BYOD) solution.
Delivering a network for public safety with increased geographical coverage, redundancy and resiliency.
“Governor Fallin’s decision to join FirstNet comes at the recommendation of the Oklahoma Public Safety Broadband Network Governing Board. They worked through a very detailed decision-making framework that weighed all options to assure public safety needs were kept front and center,” said FirstNet Board Vice Chairman Jeff Johnson. “FirstNet is pleased to have delivered a network solution that best meets Oklahoma’s needs. We look forwarding to connecting first responders across Oklahoma’s diverse landscape, providing them access to the only network purpose-built for public safety.”

The decision enables FirstNet and AT&T to begin creating an entirely new wireless ecosystem for public safety communications. Oklahoma’s first responder subscribers will have immediate access to quality of service and priority to voice and data across the existing nationwide AT&T LTE network.

The administration’s decision to opt-in will enable AT&T to build out FirstNet in Oklahoma and begin planning and construction ahead of schedule. This will create a highly secure public safety network for Oklahoma’s first responder subscribers and provide priority use and preemption on this network.

“We’re honored to deliver this game-changing communications tool to first responders in Oklahoma,” said Steve Hahn, President of AT&T Oklahoma. “I applaud Governor Fallin’s diligence and thank her and her staff for the care they’ve taken to ensure the FirstNet network that’s built in Oklahoma meets the needs of the public safety community and Oklahoma residents for years to come.”