The T-Band as it is referred to, is radio spectrum at 470 MHz to 512 MHz and in most of the United States, it is where TV channels 14-20 are located. However, these TV channels were re-allocated in eleven major metro areas, including any jurisdictions within a fifty-mile radius, for use by public safety and business radio in some cities. In 2012 when FirstNet was formed by Congress, one provision of the law was that public safety would have to return the T-Band to the FCC in 2022. Such “giveback” provisions are often seen in Congressional bills, giving the parties one thing but requiring them to divest themselves of another. At the time, 2022 seemed like a long way away, yet the eleven metro areas were concerned, and rightly so. The National Public Safety Telecommunications Council (NPSTC- pronounced Nip-Stick) soon formed a working group and within a year published a paper outlining the issues and this paper was updated in 2016. Both papers were exhaustive studies of the number of T-Band systems in use in each of the metro areas with a review of any spectrum that might be available to public safety agencies in these metro areas that had not already been licensed, and the cost in both time and money to move all these networks to different portions of the spectrum.

It appears from my vantage point that some in Congress were led to believe by at least one vendor that by the time the deadline came around, FirstNet would be able to absorb the public safety traffic. As we all know, FirstNet is not anywhere near ready to be a 100 percent substitute for all of the required voice communications services provided by Land Mobile Radio (LMR) and the chances of the network being able to provide all of the services including off-network communications are, in my mind, slim to none by the time 2022 comes around. So, there is no new spectrum available for the displaced T-Band users, no money, and not enough time to put new networks in place. FirstNet will not be ready, and Congress made one more glaring error. The law did not include the order for business radio users who are also licensed to use T-Band spectrum in some of the metro areas to vacate the T-Band.

Clearing the T-Band of public safety users and leaving business users in place would not accomplish anything but it would place a huge burden on the public safety community. In other words, Congress dug a big hole that could impact thousands of public safety radios and a large number of business radios as well. At this point, Congress seems to be ignoring this issue, perhaps thinking it will simply go away but it won’t.

In my last blog about the T-Band I suggested a five-year extension of the deadline. When Congress had its eye on the spectrum in 2012, I am sure it saw large dollar signs from an auction of the spectrum for broadband usage. I hope at least the telecommunications staffers in Congress will come to the realization that after the incentive auction’s poor showing, and the lack of interest on the part of many broadband providers, the value of T-band spectrum that is too low in frequency for broadband mobile use and is available only in a few metro areas is basically zero. While I am concerned about the major metro systems public safety will lose and I don’t think can be replaced, I am also worried about the smaller departments that have also been using the T-Band for a long time.

To highlight this, I will use Delaware County, Pennsylvania as my example. I chose this county for several reasons. It is the first county west of Philadelphia where I was born and raised and spent a great deal of time in public safety and communications while living there. I also grew up with a very good friend in that county who is also a ham radio operator, a graduate electrical engineer, and an attorney who practices law in technology-related matters including LMR issues. Also important, he is a Pennsylvania fire academy graduate, captain of his volunteer fire department, and the de facto communications officer for the fire department. 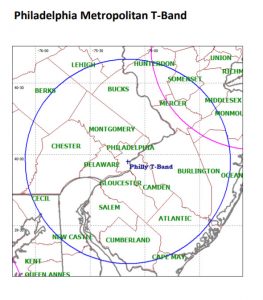 His department, like most volunteer departments in Delaware county, is part of the county T-Band system that serves police, fire, and EMS for the majority of the county. In addition, his department has its own T-Band system for communications between its units and those responding to the fire house, for drills, and to augment the county system. He is well aware that they will have to move off the T-Band and has researched available spectrum only to come to the conclusion that there are no vacant channels in VHF, UHF, or 700/800 MHz where they could go. So far, the county communications staff has taken the position that they cannot move until they obtain funding and someone identifies suitable spectrum to move to successfully. Apparently, as far as the many county fire departments have been informed, there has been no focused attempt to find another portion of the spectrum they could move to, and in fact, there is likely not enough suitable spectrum available in the area without a substantial reduction in radio services. The volunteer departments are responsible for selecting, funding, and maintaining their own equipment on both their private channels and the county’s radio system. Replacing 45 or so conventional analog radios can be a serious challenge for a small department to be sure. If the change needs to be to some kind of digital trunking system, the cost will be overwhelming and require several years of advanced planning to say the least.

Major city communications and public safety communities are working to find a solution and many are spending time and effort to convince Congress to make changes. Smaller departments and counties are not in a position to exercise any political clout and it seems that many such as Delaware county either do not believe they will have to move or there will be a last-minute reprieve. This is dangerous on two fronts. The first is that if the law is not changed they will, in fact, have to vacate the T-Band. If they have no funding and nowhere to go, what happens to public safety voice communications for these smaller departments? The other danger is to assume a hero in a white hat will ride into the county and save the day at the last minute. We can hope this will happen, but to have no contingency plan in place is not the best course of action.

I try my best not to become entangled in political discussions or situations but in this case, it is important to note that the political party that pushed for and required the giveback of the T-Band is in the majority today in Washington, DC, and the major metro areas involved are, for the most part, cities where the other party enjoys the majority. As a result, the many trips to Congress to try to find a solution to this problem have been met with a lack of interest because it appears to be a minority party problem. Will politics dictate what happens to the more than 900 public safety agencies that today hold licenses in the T-Band in eleven metro areas?  Perhaps those in Congress should study the fifty-mile radius plots for T-Band coverage and see how many counties outside the major city are also affected and perhaps look at the political leanings in each of these counties before they are so quick to dismiss the T-Band as a minority issue.

I am still a believer in FirstNet but I am a realist, too. Over the course of my fifty-plus year career I have watched as technical and marketing folks have promised great things and stated they will be here in just a few short years. Twenty years later we are still waiting. I am not referring to the FirstNet network but rather to the voice issues that must be solved prior to anyone, anywhere, deciding FirstNet is the only public safety communications system needed. Especially if those making such statements are not those inside the public safety community who risk their lives for all of us every day and whose last hope when they are in trouble is to reach for their microphone and ask for help.

The UK promised LTE would replace Tetra LMR systems by this year, then it was delayed, and now an LTE replacement is being promised for a year or two in the future. Tetra is the off-network solution because LTE does not support off-network voice communications and is not even ready to be considered as an alternative. I hope those in Congress who can influence a change to the T-Band giveback situation will spend some time looking at the NPTSC report, talking to people in the public safety community, and yes, looking at party affiliations of those outside the major cities but within the fifty-mile ring of service. In any event, public safety’s use of the T-Band must not be casually tossed out the window.

Public Safety Advocate: Too Early for LMR vs. FirstNet Rhetoric