“The State of Arizona is ready to work shoulder-to-shoulder with AT&T and FirstNet to finally deploy a true interoperable nationwide communications system for public safety.” 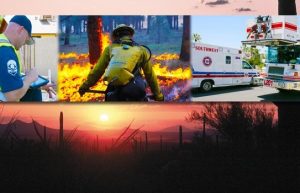 RESTON, Va., August 14, 2017 – The State of Arizona is opting into FirstNet. With this decision, FirstNet and AT&T* will deliver a specialized wireless broadband network to Arizona’s public safety community. This makes Arizona the 13th state or territory in the country to bring first responders advanced technologies that will help them save lives and protect communities.

“The State of Arizona is ready to work shoulder-to-shoulder with AT&T and FirstNet to finally deploy a true interoperable nationwide communications system for public safety. We have much work ahead of us, but with AT&T’s open communication and commitment to excellence, the future for all first responders will be safer as will the lives of our citizens,” said Col. Frank Milstead, Director of the Arizona Department of Public Safety.

AT&T, in a public-private partnership with FirstNet, will build, operate and maintain a highly secure wireless broadband communications network for Arizona’s public safety community at no cost to the state. The FirstNet network will drive innovation and create an entire system of modernized devices, apps and tools for first responders.

The FirstNet network will transform the way Arizona’s fire, police, EMS and other public safety personnel communicate and share information. Specifically, FirstNet and AT&T will:

Connect first responder subscribers to the critical information they need in a highly secure manner when handling day-to-day operations, responding to emergencies and supporting large events, like football games at the stadium in Glendale that draw more than 70,000 fans.
Create an efficient communications experience for public safety personnel in agencies and jurisdictions across the state during natural disasters including severe weather, flash floods and extreme temperatures that contribute to seasonal wildfires, like the Goodwin Fire that engulfed more than 20,000 acres of chaparral.
Enhance network coverage in rural areas. This will benefit first responders and residents throughout Arizona’s topographically diverse landscape, as well as those who service and visit the state’s popular State and National Parks.
Drive infrastructure investments and create jobs across the state.
Usher in a new wave of innovation that first responders can depend on. This will create an ever-evolving set of life-saving tools for public safety, including public safety apps, specialized devices and Internet of Things technologies. It also carries the potential for future integration with NextGen 9-1-1 networks and Smart Cities’ infrastructure.
The FirstNet solution that will be built in Arizona was designed with direct input from the state’s public safety community. FirstNet has been meeting with Arizona’s elected officials and public safety community for several years to address their unique communications needs. This includes:

Strengthening coverage along the state’s southern border and around the Grand Canyon, as well as on tribal lands, in rural regions and in and around state prisons.
Bringing first responders access to innovative solutions that will help solve the communications challenges they face today.
Getting public safety quick access to the features and capabilities they need.
“This decision comes after the state considered several options to get the best solution for its public safety community,” says FirstNet CEO Mike Poth, who began his law enforcement career with the Tempe Police Department. “FirstNet and AT&T are pleased to have been selected for having the best network solution for the state, and we are honored to serve Arizona’s first responders.”

The decision enables FirstNet and AT&T to begin creating an entirely new wireless ecosystem for public safety communications. Arizona’s first responder subscribers will have immediate access to quality of service and priority to voice and data across the existing nationwide AT&T LTE network.

“After thoughtful analysis that included issuing an RFP, Arizona concluded that opting in provided the best solution for their first responders. We couldn’t be more pleased about that,” said Chris Sambar, senior vice president, AT&T – FirstNet. “We take our public safety mission very seriously, and we’re honored to deliver first responders access to the cutting-edge tools and technologies that will help them better serve the people of Arizona.”

Opting in: App-Enabled Public Safety Network Depends on a Unified and Interoperable Platform

Louisiana Opts in for FirstNet Communications System for First Responders