By Sept. 1, all patrol officers will be issued cameras — which are smartphones loaded with software developed by Silicon Valley-based Visual Labs. 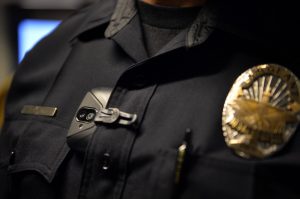 Fontana Police Department hold a press conference announcing the implementation of 200 body worn cameras on Tuesday, August 8, 2017 in Fontana, Ca. Training on policy and cameras, which are in the form of Android smartphones, has already begun with a target date of September 1 as the official rollout for all cameras. (Micah Escamilla, The Sun/SCNG)

The Fontana Police Department will enter the forefront of law enforcement technology in the coming month by equipping officers with state-of-the-art body cameras.

By Sept. 1, all patrol officers will be issued one of the cameras — which are actually smartphones loaded with software developed by Silicon Valley-based Visual Labs. The company refers to the cameras as “Body-Worn Computers,” since in addition to being able to take video, among other things, they can record audio, transmit officers’ locations to their supervisors, live stream video.

“This really is the forefront…,” said Visual Labs CEO Alex Popof. “The only device (officers) need is the smartphone. It’s real time and it’s a singular device.”

The 200 Kyocera “rugged” smartphones — rugged being a term for military-style — were paid for in part by a Department of Justice grant. The $546,502 grant was split in half between the Fontana Police Department and the San Bernardino Police Department. San Bernardino police spokeswoman Eileen Hards said they will be implementing their body-worn camera program in the next few weeks.

Are Samsung Smartphones a Threat to Axon Body Cams?

FirstNet, an app and smartphones as body cams: How one police department put them together

Be the first to comment on "New Fontana Police Body Cameras Record Video — And Much, Much More"