Federal Heights Police Department, one of the first to adopt body cameras in Colorado, will use app to track officer location and provide live feeds 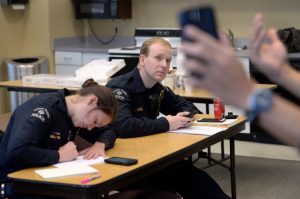 FEDERAL HEIGHTS, CO – SEPTEMBER 28: Officers Abbey Geerdes, left, and Patrick Warren of the Federal Heights Police Department, get their first day of training on new body cameras on September 28, 2017 in Federal Heights, Colorado. The department is actively applying for grants and implementing new technology, like these cameras, and using training methods to improve their community policing. (Photo by Kathryn Scott/The Denver Post)

The scene at the Federal Heights City Hall conference room is decidedly “first day of school.” Rows of officers stare up at a dim projection on the wall. Handouts with notes scribbled on the margins are splayed across the long tables. A man sitting backward in his chair leans toward his neighbor and asks, “How’d you get back to there?”

But these Federal Heights police officials aren’t practicing the quadratic equation or discussing a chapter of “To Kill a Mockingbird.” They’re participating in a demonstration of new body camera technology from California-based Visual Labs. They’ll be the first officers in Adams County — and one of only several dozen forces in the country — to use the app- and smartphone-based cameras.