A domestic violence suspect. A gunman on the loose. And a missing child.

These are the kinds of calls Unmanned Aerial Vehicles commonly known as “drones’ have helped to assist Modesto Police in helping solve crime. 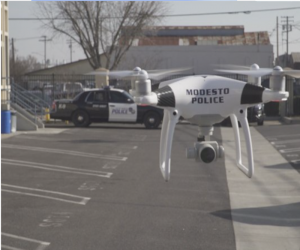 “They’re incident specific,” said Lt. Ivan Valencia of the Modesto Police Department who oversees the department’s Unmanned Aerial Vehicle program. “I know some of the concerns are privacy concerns. But, these things will not be up in the air randomly. They will deployed when needed.”

Eleven police officers are trained to use them, along with three firefighters. They are equipped with cameras, and some with heat sensing capability.

But Valencia says the price of drones have dropped significantly to the point where they can be purchased for $1,000 or less. The money to purchase them has come out of the department’s general fund.

Along with solving crime, Valencia says the drones have also been used to give firefighters a birdseye view of a fire or natural disasters, such as flooding along rivers.

Be the first to comment on "Drone program helping Modesto Police, now Stockton next up"