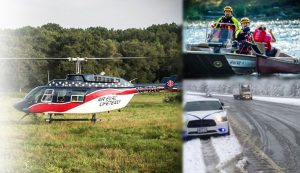 RESTON, Va., July 13, 2017 – Today at the National Governors Association’s summer meeting, Governor Asa Hutchinson announced his decision to join the FirstNet network. This will make Arkansas one of the first states in the country to “opt in” to FirstNet and bring advanced technologies that will help first responders save lives and protect communities.

“First responders put their lives on the line each day to protect our communities. I am excited to partner with FirstNet and AT&T to provide innovative communication technologies and tools that will help first responders protect communities and lives. This is a major step forward for the Arkansas public safety community, and I am proud that Arkansas is among the first states in the nation to opt in to this critical infrastructure project,” said Governor Asa Hutchinson.

FirstNet and AT&T will build, operate and maintain a highly secure wireless broadband communications network for Arkansas’ public safety community at no cost to the State for the next 25 years. The FirstNet network will deliver innovation and create an entire system of modernized devices, apps and tools for first responders.

This is one of the most economical and technologically advanced decisions Governor Hutchinson will make for the State’s first responders and the residents they serve. The network will transform the way Arkansas’ fire, police, EMS and other public safety personnel communicate and share information. Specifically, FirstNet and AT&T will:

Connect first responder subscribers to the critical information they need in a highly secure manner when handling day-to-day operations, responding to emergencies and supporting large events such as the Arkansas State Fair and Riverfest.
Create an efficient communications experience for public safety personnel in agencies and jurisdictions across the State during natural disasters. This includes fires and severe weather events like tornadoes, straight-line winds, ice storms and devastating flooding throughout Arkansas.
Enhance network coverage in rural areas. This will benefit first responders and residents in less populated areas of the state.
Drive infrastructure investments and create jobs across the State.
Usher in a new wave of innovation that first responders can depend on. This will create an ever-evolving set of life-saving tools for public safety, including public safety apps, specialized devices and Internet of Things technologies. It also carries the potential for future integration with NextGen 9-1-1 networks and Smart Cities’ infrastructure.
“Governor Hutchinson and I have shared a vision for a safe and secure country since our days in Homeland Security. Today, he has made one of the most economical and technologically advanced decisions he can make for the safety of Arkansas’ residents and first responders,” said former Pennsylvania Governor and Homeland Security Secretary Tom Ridge. “Participation in FirstNet is going to transform how Arkansas’ first responders coordinate during emergencies and everyday situations.”

The FirstNet solution that will be built in Arkansas was designed with direct input from the State’s public safety community. Since 2013, FirstNet has met with Arkansas officials and public safety personnel more than 30 times to address their unique communication needs and challenges. This includes:

Understanding the importance of serving the State’s diverse coverage needs.
Caring for coverage in rural areas and park and recreation grounds.
Providing capacity in densely populated areas.
Enabling access to dedicated network technologies that can be deployed in emergencies to support on-demand needs like search and rescue operations.
“Arkansas has been a tremendous partner to work with to plan and design this network,” said FirstNet CEO Mike Poth. “With today’s decision, Governor Hutchinson realizes public safety’s efforts and sets this life-saving network into motion. We look forward to delivering the technology and communication tools that first responders need to serve and protect the residents of Arkansas.”

The decision enables FirstNet and AT&T to begin creating an entirely new wireless ecosystem for public safety communications. Arkansas’ first responder subscribers will have immediate access to quality of service and priority to voice and data across the existing nationwide AT&T LTE network.

“It’s a privilege to bring the FirstNet network to Arkansas,” said Chris Sambar, SVP, AT&T – FirstNet. “Governor Hutchinson is making the safety of his first responders and Arkansans a top priority. His decision will give public safety the tools and technologies they need to keep themselves and those they protect safe.”

“It is our honor to provide advanced communications capabilities to ensure Arkansas’ first responder community has a network they can rely upon when needed most,” said Ed Drilling, president, AT&T Arkansas. “AT&T has a long history with the public safety community, and together we know we will create a first-of-its-kind network that will help first responders operate faster, safer and more effectively when lives are on the line. We will bring first responders the coverage, value and experience they expect.”

11 Down, 45 To Go: How FirstNet’s Opt-in/Opt-out Process Is Advancing