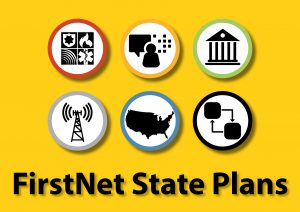 Network Buildout Will Create Jobs and Generate Investments in States Across the U.S.

RESTON, June 19, 2017 – FirstNet and AT&T* are taking an important step to deliver the first nationwide high-speed data and voice network for America’s first responders. Today, the two will provide U.S. states and territories with individual State Plans to enable the rapid deployment of this first-of-its-kind FirstNet network. The network buildout proposed in the State Plans will create thousands of new jobs nationwide and drive investments across the states and territories.

Delivery of the State Plans comes 3 months ahead of schedule. This marks a major milestone in the deployment of the FirstNet network. The network will modernize public safety communications and provide first responders with technologies to help them save lives and protect communities.

With this step, we’re ready to deliver the first nationwide network for public safety, by public safety,” said FirstNet CEO Mike Poth. “This network will drive innovation, security and interoperability for public safety across the country. It’s what EMS, fire and law enforcement spent years fighting for and need right now.”

Since 2013, FirstNet has worked hand-in-hand with the states, territories, localities, federal authorities and the public safety community to make sure the network is specifically built for their needs. Developed with this input, the customized plans outline the coverage, features and mission-critical capabilities FirstNet, together with its partner, AT&T, will bring to first responders and other public safety personnel.

The State Plans will be released today via an online portal. States and territories can spend up to 45 days to review the plans. The states and territories will also have the opportunity to exchange feedback with FirstNet before an official 90-day clock starts for each state or territory governor to make an “opt-in/opt-out” decision on its State Plan.

A governor’s decision to opt-in will open the door for FirstNet and AT&T to immediately begin delivering services to that state or territory’s public safety community. It’s a decision that will also drive infrastructure investments and job creation.

As governors opt-in, FirstNet and AT&T will kick-off the network build process. It’s a decision that will:

Transfer the financial, operational and technical risks of building, maintaining and upgrading the FirstNet network in the state or territory to AT&T for the next 25 years.
Launch key network features that public safety has fought for, like quality of service and priority access to voice and data across the existing nationwide AT&T LTE network.
Provide preemption over the AT&T LTE network – expected by year-end. This means fire, police and EMS will have dedicated access to the network when they need it.
Deliver feature-rich services at competitive rates for first responders.
Public safety spent years advocating for a nationwide broadband network for first responders following the September 11, 2001, terrorist attacks. Major public safety organizations continue to voice their strong support for the FirstNet network today. The FirstNet State Plan comes fully funded and will require no additional financial resources from the states to deploy or operate the network.

“Joining the FirstNet network is one of the most economical and technologically advanced decisions a leader can make for the safety of its residents and first responders – as well as for the safety and security of the country,” said former Pennsylvania Governor and Homeland Security Secretary Tom Ridge. “The network will help transform how the nation’s fire, law enforcement and EMS personnel communicate. First responders will be able to coordinate and respond more quickly and effectively during emergencies and everyday situations.”

The need to save lives in the field is a reality for all of our first responders across all of our communities,” said Ed Davis, former Boston police commissioner. “Public safety can’t serve our communities without coordinated communications capabilities. The mission to deliver this is at the core of the network that FirstNet and AT&T are bringing forward.”

The First Responder Network Authority (FirstNet) is an independent authority within the U.S. Department of Commerce. Chartered in 2012, its mission is to ensure the building, deployment, and operation of the nationwide, broadband network that equips first responders to save lives and protect U.S. communities. Learn more at FirstNet.gov/newsroom/media-kits and follow FirstNet (@FirstNetGov) on Facebook and Twitter for updates.

AT&T Inc. (NYSE:T) helps millions around the globe connect with leading entertainment, business, mobile and high speed internet services. We offer the nation’s best data network** and the best global coverage of any U.S. wireless provider. We’re one of the world’s largest providers of pay TV. We have TV customers in the U.S. and 11 Latin American countries. Nearly 3.5 million companies, from small to large businesses around the globe, turn to AT&T for our highly secure smart solutions.

Be the first to comment on "FirstNet and AT&T Advance Nationwide Broadband Network for Public Safety; Release Buildout Plans for States and Territories"