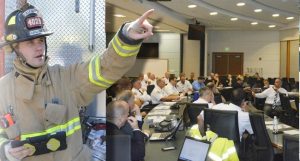 FirstNet is the result of the 9/11 Commission’s recommendation that a dedicated public safety interoperable, nationwide mobile broadband network be created to enable continued communication during a disaster or other large-scale event. The Governor’s decision marks a significant step in the realization of this recommendation.

“I am proud that Virginia is the first state in the nation to opt in to this program that will help our first responders communicate during times of emergency,” said Governor Terry McAuliffe. “While this is only the beginning of the process, I look forward to the continued coordinated efforts among Virginia, FirstNet, and AT&T to provide public safety officials with innovative new technologies that will help them keep Virginians safe.”

“Public safety has spent years advocating for a nationwide network following the September 11, 2001 terrorist attacks, and today, Governor McAuliffe is helping to answer that call by joining the FirstNet network,” said FirstNet CEO Mike Poth. “FirstNet will be able to put the technology citizens use every day—like smartphones and apps—into the hands of Virginia’s first responders, modernizing how they help save lives and protect residents while creating a single, interoperable system across the Commonwealth and across the country.”

Public safety subscribers to AT&T will be able to take advantage of priority service on AT&T’s existing LTE network nationwide. Localities will have full local control to identify their responders and assign priority as needed based on the circumstances. By the end of 2017, public safety subscribers will also have preemption capability on the network, helping to further ensure their ability to communicate.

“Allowing FirstNet and AT&T to move forward with the deployment of the Nationwide Public Safety Broadband Network in Virginia moves public safety closer to the reliable, mission‑critical broadband service that is needed for evolving threats,” said Secretary of Public Safety and Homeland Security Brian Moran.

“I am extremely pleased that Virginia is choosing to opt into the network,” said Fairfax County Fire Chief Richard Bowers“Access to the network will provide us with additional tools to help ensure we can do our job when the time comes.”

The Commonwealth will continue to work with FirstNet and AT&T and our local partners to provide feedback in order to ensure a viable network that will enhance public safety communications throughout Virginia.

AT&T CEO says FirstNet build is one-third completed, will help 5G push and increase network capacity by 50% by end of 2019