Northern Mariana Islands Gov. Ralph DeLeon Guerrero Torres announces that he has accepted the nationwide public-safety broadband network (NPSBN) deployment plan offered by FirstNet and AT&T, meaning all 56 states and territories in the U.S. have made an “opt-in” decision. 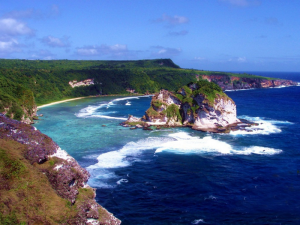 “Today, Gov. Torres made history,” FirstNet CEO Mike Poth said in a prepared statement. “With his decision to join FirstNet, we are proud to have every U.S. state and territory on the nationwide public safety broadband network.

“Gov. Torres’s decision will help enhance emergency communications across the territory’s rural and remote areas by bringing coverage and capacity to the islands. We look forward to continuing to work with public safety in the Northern Mariana Islands to help ensure that emergency first responders will have access to the most modern and innovative tools available today.”

Under the law that established FirstNet, governors in all 56 states and territories have the choice of making an “opt-in” decision—accepting the FirstNet deployment plan and allowing AT&T to build the LTE radio access network (RAN) within the state’s borders at no cost to the state—or pursuing the “opt-out” alternative, which would require the state to be responsible for building and maintaining the RAN for the next 25 years.

With today’s Northern Mariana Islands announcement, governors in all 50 states, the District of Columbia, and five territories have made “opt-in” decisions. As a result, all processes associated with the “opt-out” alternative—reviews by the FCC, the National Information and Telecommunications Administration (NTIA), as well as spectrum-lease negotiations with FirstNet—will not be needed.

“Opting in to FirstNet is a clear sign of Gov. Torres’s commitment to public safety in the Northern Mariana Islands,” said Stephanie Tyler, president, AT&T Pacific Northwest. “First responders deserve the best possible communications platform, and we’re honored to help deliver it for them.”