“The entire state, from the Great Lakes to the most remote areas of the Adirondacks to New York City, must have seamless communication for our public safety community so that they can get more information quickly, make better informed decisions, and save lives.” 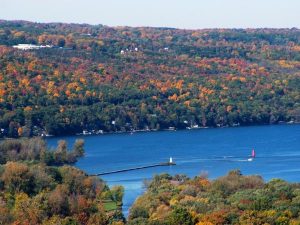 “During emergencies and disasters, every second counts, and ensuring our first responders have the tools they need during a crisis is vital to the safety and security of all New Yorkers,” Governor Cuomo said. “The entire state, from the Great Lakes to the most remote areas of the Adirondacks to New York City, must have seamless communication for our public safety community so that they can get more information quickly, make better informed decisions, and save lives.”

AT&T, in a public-private partnership with the First Responder Network Authority, will build, operate and maintain a highly secure wireless broadband communications network for New York’s public safety community at no cost to the state. The FirstNet network will drive innovation and create an entire system of modernized devices, apps and tools for first responders.

Division of Homeland Security and Emergency Services Commissioner Roger L. Parrino, Sr. said, “It is important to recognize that our first responders need reliable tools to complete their mission at all times and this is especially true when communicating important information with our local, state and federal partners during a disaster or emergency. I look forward to the completion of the nationwide public safety broadband network and its ability to provide dedicated access to the first responder community when it is needed most.”

FirstNet will transform the way New York’s fire, police, EMS and other public safety personnel communicate and share information. Specifically, it will:

Connect first responder subscribers to the critical information they need in a highly secure manner when handling day-to-day operations, responding to emergencies and supporting large events like New York City’s New Year’s Eve celebration which attracts over 1 million spectators to Times Square, the New York City Marathon that attracts over 50,000 runners and nearly 2.5 million spectators each year, and the Great New York State Fair which welcomed over 1 million fairgoers in 2017.
Create an efficient communications experience for public safety personnel in agencies and jurisdictions across the state during natural disasters like blizzards, hurricanes and flooding that occur year-round.
Enhance network coverage across New York’s diverse landscape, benefitting first responders and residents throughout the state’s densely populated metro areas to rural areas and tribal lands.
Provide first responders with access to dedicated network assets that can be deployed for additional coverage and support when needed.
Drive infrastructure investments and create jobs across the state.
Usher in a new wave of dependable innovations for first responders. This will create an ever-evolving set of life-saving tools for public safety, including public safety apps, specialized devices and Internet of Things technologies. It also carries the potential for future integration with NextGen 911 networks and Smart Cities’ infrastructure.
The First Responder Network Authority and AT&T designed New York’s network solution with direct input from the state and its public safety community. This helped to address the state’s unique communications needs, which include:

Expanding coverage in rural areas like the Adirondacks, in urban areas like in buildings and the subway system, and along waterways like the Great Lakes and Long Island Sound.
Improving interoperability to support better coordination with border states and Canada.
Offering feature-rich services at competitive prices for all first responder users.
“It is especially meaningful to welcome New York into FirstNet as it was a recommendation of the 9/11 Commission that led to our very creation,” said First Responder Network Authority CEO Mike Poth. “Governor Cuomo’s decision will bring expanded and enhanced communications capabilities to the great state of New York. From giving public safety in New York City dedicated spectrum to bringing a reliable, high speed wireless connection to rural and remote areas of the state, FirstNet will improve connectivity and foster innovation for law enforcement, fire and EMS.”

The decision enables the First Responder Network Authority and AT&T to begin creating an entirely new wireless ecosystem for public safety communications. New York’s first responder subscribers will have immediate and dedicated access to the information they need with quality of service, priority and preemption for voice and data across the FirstNet network, when and where they need it – 24/7/365.

“This is a special day for the brave men and women that serve New York. And I applaud Governor Cuomo for his leadership and commitment to public safety,” said Marissa Shorenstein, president, Northeast Region, AT&T. “Opting in to FirstNet will put New York’s first responders on the cutting-edge of innovative communications, helping them operate faster, safer and more effectively when lives are on the line. We’re honored to bring this life-saving solution to the state.”