The role of the Boulder lab is to test all the applications and devices that will be offered on FirstNet to “ensure they’re going to work when we need them,” said Jeff Bratcher, FirstNet’s chief technology officer. 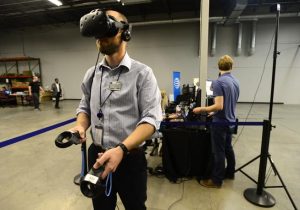 Scott Ledgerwood of Public Safety Communications Research Division at NIST works with a virtual reality testing system for new technologies at the FirstNet Innovation and Test Lab in Boulder on Thursday. Ledgerwood was in a virtual reality hotel which was on fire and the devices in his hands helped him pick up fire hoses to douse the fire. Sept. 14, 2017 (Paul Aiken / Staff Photographer)

As the ash fell from the remains of the Twin Towers on Sept. 11, 2001, thousands of Americans were desperately trying to call friends and loved ones on mobile phones. But often, they could not, as the sheer volume of calls overwhelmed the existing networks.

For the public at large, it was frustrating and fear-inducing. For the hundreds of firefighters, police officers and emergency responders attempting to coordinate rescues of the injured, it was potentially life-ending.

Sixteen years later, countless disasters have again tested our nation’s systems and found them lacking. Most recently, Hurricanes Harvey and Irma wiped out cell service for millions and created obstacles for those charged with public safety.

But a new Boulder lab, unveiled to the public on Thursday, hopes to end that quagmire once and for all.

The facility on the eastern edge of the city is the technical headquarters of FirstNet, a national broadband network solely for first responders. Created from the 9/11 Commission Report, FirstNet has a dedicated broadband spectrum, the “highway from your cellphone to the tower” on which data travels, said Walt Rivenbark, assistant vice president of marketing and market development for AT&T’s public safety division.

AT&T in March was awarded the 25-year contract to be the commercial partner on FirstNet, a public-private partnership. FirstNet will leverage AT&T’s existing system, and the company expects to pour in up to $40 billion of its own money in addition to FirstNet’s allotted $6.5 billion from the taxpayers, enough to cover the first five years of operation.

After that, the program will be self-sustaining, said Mark Golaszewski, FirstNet’s director of applications. Revenue will come from subscribing public safety departments, who will pay to utilize the network’s service, at or below rates offered to AT&T’s commercial users.

Public Safety Advocate: Will FirstNet be the OnlyNet?

Be the first to comment on "National Public-Safety Network, FirstNet, Unveils Its Boulder Equipment Lab"