With his decision, FirstNet and AT&T will deliver a specialized wireless broadband network to Maine’s first responders and bring advanced technologies that will help them save lives and protect communities. 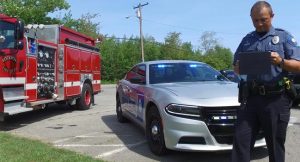 RESTON, Va., Aug. 4, 2017 – Governor Paul LePage today moved to transform first responder communications for Maine’s public safety community. Maine is the 11th state or territory to “opt-in” to the FirstNet network. With his decision, FirstNet and AT&T will deliver a specialized wireless broadband network to Maine’s first responders and bring advanced technologies that will help them save lives and protect communities.

“Maine is proud to take this important step for first responders in our state,” said Governor LePage. “The decision to join this network means that FirstNet and its partner, AT&T, will deliver a highly secure, federally funded, next-generation solution for our public safety community.”

AT&T, in a public-private partnership with FirstNet, will build, operate and maintain a highly secure wireless broadband communications network for Maine’s public safety community at no cost to the State for the next 25 years. The FirstNet network will drive innovation and create an entire system of modernized devices, apps and tools for first responders.

The FirstNet network will transform the way Maine’s fire, police, EMS and other public safety personnel communicate and share information. Specifically, FirstNet and AT&T will:

Connect first responder subscribers to the critical information they need in a highly secure manner when handling day-to-day operations and responding to emergencies. It will also help during their support of large events, such as the Maine Lobster Festival in Rockland and the Great Falls Balloon Festival in Lewiston-Auburn. Both attract more than 100,000 visitors each year.
Create an efficient communications experience for public safety personnel in agencies and jurisdictions across the State during extreme weather, including heavy snows and severe storms that can cause coastal and inland flooding.
Enhance network coverage in rural and tribal areas. Maine is one of the most rural states in America with 90 percent of its land mass covered by forests. Increased coverage will benefit first responders, residents and visitors in Maine’s recreation destinations, such as Acadia National Park, as well as tribal lands and wilderness areas.
Provide first responders with access to dedicated network deployables for additional coverage and support when needed.
Drive infrastructure investments across the State and help to create jobs.
Usher in a new wave of innovation that first responders can depend on. This will create an ever-evolving set of life-saving tools for public safety, including public safety apps, specialized devices and Internet of Things technologies. It also carries the potential for future integration with NextGen 9-1-1 networks and Smart Cities’ infrastructure.
“Governor LePage’s decision will enable a broadband network that will forever change how EMS is provided for patients statewide,” says FirstNet Board Member Kevin McGinnis, who is the former EMS Director of Maine and has been a paramedic or paramedic chief in the state for more than 30 years. ”Police and fire services will also enjoy speed, bandwidth, applications, and rural and in-building access like they’ve never seen before with this network to help protect property and save lives.”

FirstNet and AT&T designed Maine’s network solution with direct input from the State’s public safety community. FirstNet has been meeting with Maine’s officials and public safety personnel for several years to address their unique communications needs. This includes:

Enhancing coverage along Maine’s vast shoreline and waterways.
Enabling seamless communications among New England’s first responders through expanded coverage and innovative solutions.
Providing an interoperable network experience across the State and along the Canadian border. This will allow state, local and federal agencies to effectively communicate with each other as well as with the State’s large number of volunteer emergency responders.
“Governor LePage’s decision to join FirstNet will enhance public safety communications throughout the State,” said FirstNet CEO Mike Poth. “This network will connect first responders operating across Maine, from the population centers of Portland and Augusta to the State’s popular vacation destinations, and up to the remote areas near the border with Canada. FirstNet and AT&T are pleased to have delivered a plan that meets Maine’s unique needs, and we look forward to bringing the network to public safety across the Pine Tree State.”

The decision enables FirstNet and AT&T to begin creating an entirely new wireless ecosystem for public safety communications. Maine’s first responder subscribers will have immediate access to quality of service and priority for voice and data across the existing nationwide AT&T LTE network.

“Governor LePage is putting public safety first. His decision to opt-in to FirstNet will bring Maine’s first responders access to the innovative tools and technologies they need to operate faster, safer and more effectively when lives are on the line,” said Patricia Jacobs, president, AT&T New England. “FirstNet will benefit the wellbeing of Maine’s first responders, residents and visitors alike – all without costing the state anything to build, operate or maintain.”