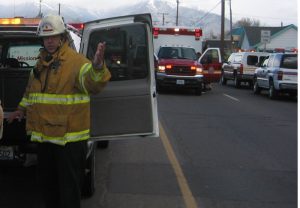 Implementing ruthless preemption throughout the AT&T network marks the on-time fulfillment of a major technological feature. After the carrier was awarded the FirstNet nationwide contract in March, AT&T officials vowed that preemptive access would available to “primary” public-safety FirstNet subscribers by the end of the year.

While some public-safety entities have used commercial broadband services for years to support data communications, first-responder representatives repeatedly noted that commercial networks could be overwhelmed by consumer use. This has been especially true during large-scale emergency incidents, as consumers typically want to contact friends and family to provide status updates about the situation.

Of course, these also are the times when public safety most needs to be able to communicate, which has been a source of frustration for first responders.

Fire Chief Richard Bowers of the Fairfax County, Va., said today’s preemption announcement is an advancement he has anticipated for years, noting his experience as a participant in the response efforts associated with the Oklahoma City bombing, the 9/11 attack on the Pentagon, and the aftermath of Hurricane Katrina.

“The common themes there were the inability to grab a cell site to communicate on emergency operations,” Bowers said during an interview with IWCE’s Urgent Communications. “That was a consistent issue for response personnel, speaking from my experience in both of those situations. When you needed to have a connection, you couldn’t always get it. Now, we will—and that’s huge.

“It’s about the safety of our first responders and certainly the safety of those that we’re responding to. This is a monumental achievement in communications and operations.”

Public Safety Advocate: From One IWCE to the Next