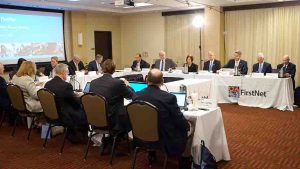 At its quarterly meetings this week in Boulder, Colorado, the FirstNet Board also participated in a series of technology demonstrations at the FirstNet Innovation and Test Lab with its Network partner, AT&T, and the Public Safety Communications Research (PSCR) Program. The lab demonstrations showcased how FirstNet’s reliable, dedicated broadband network will transform the way first responders communicate and share information to support emergency response in their communities.

“As the nation reflects on the 16th anniversary of September 11 and recovers from the devastating hurricanes and wildfires of recent weeks, we are reminded of the selflessness and bravery of our first responders,” said FirstNet Chair Sue Swenson. “FirstNet remains laser-focused on delivering lifesaving technologies that will help them save lives – every day and in every emergency.”

In approving FirstNet’s FY18 budget, the Board allocated $73.5 million for key developments that support the operation and oversight of the Network, as well as customer outreach, product marketing, and future innovation. That amount marks a 13% decrease over FirstNet’s current funding level and is a direct result of establishing a public-private partnership with AT&T to execute its top priorities in the coming fiscal year, including:

Launching the Radio Access Network (RAN) build-out for opt-in states; as of today, 20 states and territories have announced decisions to “opt in” and accept the FirstNet RAN buildout plan;

Evolving and delivering applications through an open application ecosystem;

Completing the FirstNet-dedicated public safety core and updating the core’s services and security; and

Initiating Band 14 on the Network

“This budget reflects strong financial management and allows us to continue making remarkable progress in the coming year toward delivering public safety’s network,” said FirstNet Chief Executive Officer Mike Poth. “FirstNet is well positioned to deliver the financially sustainable network that we are entrusted with for the benefit of first responders and the communities they serve.”

Be the first to comment on "FirstNet Board Approves FY18 Budget for Continued Progress on Network Implementation, Innovation, Public Safety Advocacy"