“This is only a first step, but this plan has real potential to prioritize communications among law enforcement agencies, fire and EMS personnel, and help our first responders protect the lives of Delawareans across our state.” 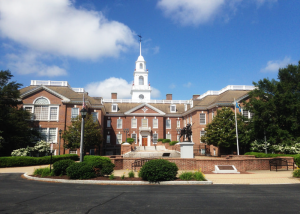 “Delaware’s first responders need access to state-of-the-art technology to communicate and respond effectively during emergency situations,” said Governor Carney. “This is only a first step, but this plan has real potential to prioritize communications among law enforcement agencies, fire and EMS personnel, and help our first responders protect the lives of Delawareans across our state.”

AT&T, in a public-private partnership with the First Responder Network Authority, will build, operate and maintain a highly secure wireless broadband communications network for Delaware ’s public safety community at no cost to the state for the next 25 years. The FirstNet network will drive innovation and create an entire system of modernized devices, apps and tools for first responders.

FirstNet will transform the way Delaware’s fire, police, EMS and other public safety personnel communicate and share information. Specifically, it will:

Connect first responder subscribers to the critical information they need in a highly secure manner when handling day-to-day operations, responding to emergencies and supporting large events in Dover, Wilmington and throughout the state.
Create an efficient communications experience for public safety personnel in agencies and jurisdictions across the state during natural disasters and severe weather like Hurricane Jose in September 2017 that caused coastal flooding and high winds in the state.
Enhance and expand network coverage across Delaware to cover areas underserved today, benefitting first responders and residents throughout the state’s urban, coastal and rural areas.
Provide first responders with access to dedicated network assets that can be deployed for additional coverage and support when needed.
Usher in a new wave of dependable innovations for first responders. This will create an ever-evolving set of life-saving tools for public safety, including public safety apps, specialized devices and Internet of Things technologies. It also carries the potential for future integration with NextGen 911 networks and Smart Cities’ infrastructure.
The First Responder Network Authority and AT&T designed Delaware’s network solution with direct input from the state’s public safety community. This helped to address the state’s unique communications needs, including:

Extending coverage to include rural areas across the state, the Atlantic beach areas and the coastline of the Delaware Bay while also improving in-building coverage.
Including a deployable solution that supports emergency response and events.
Demonstrating awareness of the public safety mission when it comes to customer care and support.
“With Governor Carney’s decision today, FirstNet will deliver a state-of-the art network to address the challenges of communicating in all parts of Delaware – whether along the coast or in rural or underserved areas,” said First Responder Network Authority CEO Mike Poth. “Joining FirstNet will make all the difference for Delaware’s first responders when working to keep the communities they serve safe and secure.”

The decision enables the First Responder Network Authority and AT&T to begin creating an entirely new wireless ecosystem for public safety communications. Delaware’s first responder subscribers will have immediate and dedicated access to the information they need, quality of service, and priority and preemption for voice and data across the FirstNet network, when and where they need it – 24/7/365.

“I’d like to thank Governor Carney for his dedication to first responders here in Delaware,” said Denis Dunn, president, AT&T Delaware. “We’re honored to help support the public safety mission and to provide the state with the best solution to help protect the safety of those first responders who save lives.”