In the first of 56 decisions to be made by state leaders in the coming months, Virginia signs on with the federal government’s proposal for the next generation of public safety communications technology. 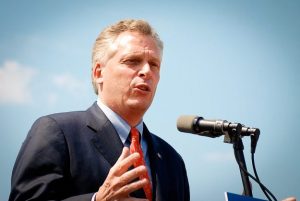 Virginia is the first state to opt in to FirstNet, Gov. Terry McAuliffe announced after signing a letter of intent Monday.

FirstNet, the federal agency responsible for building the first nationwide interoperable communications network for first responders, released plans to states on June 20 that provided leaders their first look at what the network will look like. The details included in the plans, which remain available only to state officials, enabled leaders to begin deciding whether they would “opt in” to the network being designed and built by contractor AT&T or instead “opt out” and procure a comparable solution from a third party to be connected to the national system.

While several states have issued requests for information or requests for proposal from vendors, Virginia is the first state to announce an official decision in either direction.