Texas City ISD will become a federally recognized emergency responding agency through FirstNet/AT&T. When emergency situations take place, many phone lines get jammed with an influx of calls. This system would give our deputies and administrators the ability to have communication priority on a nationwide public safety broadband network. The Texas City Police Department and the City of Texas City will also begin using FirstNet. 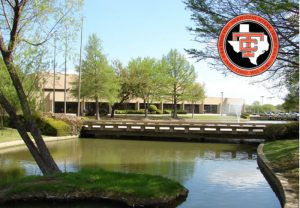 TEXAS CITY – This summer, Texas City ISD investigated a multitude of options to improve and enhance safety and security in the district.

“We are off to a good start but there is so much more that we’ll implement later,” said Mike Matranga who has been employed as the executive director for safety and school safety in TCISD for the last 6 weeks. “We have to be prepared now for what we would do if we had an active shooter on campus. At the same time, we’ll be putting things in place to eliminate potential risks.”

There are some things that will be behind the scenes that people won’t see or realize the district is doing. Other things will be very visible.

The TCISD Board of Trustees approved the hiring of an additional 8 deputies through the Galveston County Sheriff’s Office bringing the total to 19 school liaison officers. Each campus, including elementary schools, will have at least one deputy. Also, for the first time ever, TCISD will have their own K-9 unit. “Our dog will be highly trained to alert on drugs. This dog will work daily in our schools and will also be present at extracurricular events that the public attends like football games,” Matranga said.

Texas City ISD will become a federally recognized emergency responding agency through FirstNet/AT&T. When emergency situations take place, many phone lines get jammed with an influx of calls. This system would give our deputies and administrators the ability to have communication priority on a nationwide public safety broadband network. The Texas City Police Department and the City of Texas City will also begin using FirstNet.

Should a man-made or natural disaster strike, TCISD will use Mutualink and BearCom to share information and optimize response time. “We can do so much with this program,” said Matranga. “It integrates with our existing camera systems and will work with emergency responders, hospitals and school personnel even if they have different devices and networks.”

BearCom and FirstNet/AT&T will provide the indestructible equipment our staff will use to run the Mutualink software that connects with law enforcement more quickly. “Our Galveston County Sheriff’s deputies will be the first on scene. Besides the panic button that will sync to 911 immediately, this program will provide other first responders and administrators with real time video and audio as an event is taking place,” said Matranga. “That information is invaluable to those who are on their way to help.”

The board also approved an RFID system that will monitor students and staff in buildings and buses. “There have been school districts that have received push back in the past from parents about school personnel being able to track their children,” said Matranga. “But the location data this system provides is crucial if there is a problem like a medical emergency, fight or worse.” The system can also be used in non-emergency situations like being able to generate attendance reports.

When all staff members return in August, professional development will have a strong focus on security. All staff will go through threat assessment training. Administrators had the training in April. The training will help all staff learn how to identify, investigate and evaluate threats. “This was the best training I have ever been to in my professional career,” said Dr. Rodney Cavness, superintendent of schools. “After every school shooting, there are people who say they knew it was going to happen. The signs were there from interactions with friends or social media messages. This training will give us all the tools we need so that we can appropriately assess a threat and get the help a student needs before they do something violent to themselves or others,” he said. All staff members will also receive Stop the Bleed training to know how to help in a bleeding emergency before professionals arrive.

Other things that will be implemented this school year include: mental health reporting, bullet proof glass reception areas, social media monitoring, infrastructure security improvements (ex. doors, windows, locks), upgraded camera systems, and student/parent safety committees. Other safety measures TCISD is continuing with include the free smartphone anonymous reporting app called P3 Campus. Students, parents and anyone in the school community should download and use it to report safety concerns. https://www.p3campus.com/index.htm In addition, TCISD will conduct its second joint active shooter training at La Marque High School on August 7 with Texas City and La Marque police, fire and emergency management. The first one was held in March at Texas City High School.

“We hope that our parents and community will feel more comfortable knowing that we are working hard daily for TCISD to have some of the best-protected students and staff in the United States,” said Cavness.

Students and parents need to know that TCISD will be very strict on ID and dress code enforcement. “We need parents to reiterate at home the importance of following the school rules for not only their personal safety but for the safety of every person on campus” Cavness said.