Sonim Technologies announces its new XP8 and XP5S ultra-rugged LTE devices that are designed to provide FirstNet users with new public-safety-centric capabilities, including an interface that supports a module that enables direct-mode push-to-talk (PTT) communications between devices when a network is not available. 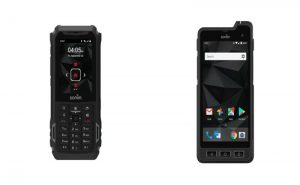 In 2013, Sonim Technologies introduced its first rugged cell phone that could operate on the 20 MHz of 700 MHz Band 14 spectrum licensed to FirstNet, which last year contracted with AT&T to build and maintain a nationwide public-safety broadband network (NPSBN). During the past five years, the handset manufacturer’s products have played a key role in more than 100 public-safety LTE trials in 30 states—experiences that drove the development of the XP8 and XP5S, according to Sonim Technologies CEO Bob Plaschke.

“We are both proud and humbled to be a handset manufacturer that takes its direction from public-safety agencies, not sitting in an R&D center, wondering what public safety will want,” Plaschke said during an interview with IWCE’s Urgent Communications. “The experience has given us deep appreciation and deep empathy for the unique set of use cases that public safety creates that are completely different than any other industry vertical.

“It’s the manifestation of the feedback [from public safety] that makes these phones truly groundbreaking.”

Chris Sambar, AT&T’s senior vice president for FirstNet, said that it is important that public safety has the “right tools” when responding to an incident.

“We’re committed to putting innovative, specialized devices into the hands of our first responders and those that support them when emergencies occur—and that’s exactly what we’re doing here with Sonim,” Sambar said in a prepared statement. “Pairing the XP8’s and XP5s’ durability and customized, robust functionality with the critical capabilities enabled by FirstNet creates a powerful tool that first responders can rely on—even in the toughest situations—to help them carry out their important, life-saving missions.”

Sonim’s new devices are designed to serve both categories of FirstNet public-safety users, with the XP8 smartphone expected to be used most by “primary” users, such as first responders in fire, EMS and law-enforcement agencies, Plaschke said. The XP5S handset is targeted more for “extended primary” users that support public-safety functions—a group that includes hospital, transportation, education and government personnel, he said.