Some of public safety’s spectrum is part of a larger war between Congress, NTIA, the FCC and, of course, all of the public safety community including most public safety organizations. First up is the T-Band portion of the spectrum. Then as the FCC, NTIA, and the carriers decided that small cells of 5G systems were the best way to solve broadband demand in major metro areas, everything above 2.5 GHz may become fair game and this includes both the 4.9-GHz public safety Wi-Fi band (50 MHz) and the 6-GHz microwave spectrum that is not only used by public safety but many point-to-point microwave hops.

It is interesting that FirstNet powered by AT&T will gain access to all of AT&T’s 5G small-cell system as it is built and this will add greatly to data speeds and capacity in metro areas and perhaps in rural areas where full-up LTE tower sites are simply not financially feasible. At the same time, AT&T and the other carriers are putting pressure on everyone in D.C. who will listen to try to continue to free up more 5G spectrum. AT&T really has no choice but to join in the spectrum reallocation efforts in order to be able to stay in parody with the other carriers and it appears as if it is doing so carefully with FirstNet as part of the puzzle it is trying to piece together above 2.5 GHz.

At the moment, 6-GHz spectrum is licensed for point-to-point microwave use and is in high demand. Even 100 miles north of Los Angeles, acquiring a 6-GHz microwave license for another point-to-point link is almost impossible. The issue here is that many who are saying the band can be shared simply do not seem to realize that most of these systems were already relocated from 2 GHz to the 6-GHz band in 2005 when the “Personal Communications Services” or PCS bands were auctioned. Los Angeles County had to redo its entire countywide microwave system that also carried much of the county’s 9-1-1 traffic. Further, 6 GHz is all that is left for longer-haul point-to-point services where it is not practical to run fiber. I don’t believe it can be set up effectively as shared spectrum without causing interference not only to public safety microwave systems but to many, many others that are already using this band as well. Today there is still an effort afoot to “share” this spectrum for unlicensed use, which makes zero sense.

In 2002, the FCC allocated 50 MHz of spectrum (4940 MHz to 4990 MHz) for use as point-to-point and mobile short-range, Wi-Fi-like services for the public safety community. It has been slow to be adopted but in some areas such as Chicago and Los Angeles it is difficult or impossible to find a point-to-point 4.9-GHz portion of spectrum. Further, as FirstNet is rolled out, I believe 4.9 GHz is an ideal adjunct to both LTE-5G for short-haul cameras and for replacing T-1 copper lines. (Have you tried ordering a T-1 lately?) Yet as the need for 4.9 GHz is becoming more evident and it is being put into service for fixed uses including backhaul for cameras, satellite receivers, simulcast systems, and more, the FCC recently proposed an amendment to the 4.9-GHz rules to foster better coordination and acceptance of the spectrum. However, there is also a move afoot to try to take back the spectrum and/or to share it, both of which seem to be bad ideas.

In 1971, the FCC in Docket 18-261 allocated a portion of the TV spectrum (470-512 MHz) for use by public safety agencies in eleven major metro areas (in some of the cities, business and industrial users were permitted to share the spectrum). Not all of the spectrum was available in each metro area, it depended on whether a TV station was active on one or more of the channels (14-20). Below is a chart courtesy of The National Public Safety Telecommunications Council (NPSTC) that appeared in its reports on the feasibility and cost to relocate public safety agencies using T-Band spectrum: 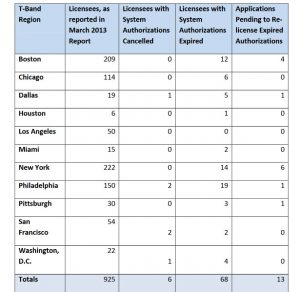 The next graphic is the FCC listing of TV channels assigned in the eleven major metro areas: 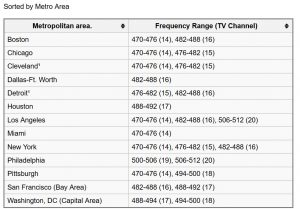 FirstNet’s Impact on the T-Band

During the years leading up to passage of the Middle-Class Tax Relief Bill of 2012 that included the creation of FirstNet, allocation of the second 10 MHz of broadband spectrum, some research and development funds, and more, the public safety community had to fight off spectrum givebacks proposed for the 150–170-MHz band, the 450–470-MHz band, and more. A few in Congress felt a need to have some spectrum “returned” to the FCC so it could be auctioned for a lot of money, and in the end, Congress (not the public safety community) settled on the T-band. However, what they did not do was to require the business and industrial users to also vacate the T-Band so the law leaves the non-public safety users in limbo.

Meanwhile, both NPSTC reports show how nearly impossible it would be to relocate those public safety users in the eleven metro areas, some of which are smaller and in some cases volunteer departments. Since there is really no funding mechanism or at least a realistic one could not be developed in a realistic period of time, and no other land mobile radio spectrum for these agencies to relocate to, the perceived answer is that FirstNet can fill in. But this is certainly not feasible in the timeframe required as I explained in last week’s Public Safety Advocate.

However, there is some good news on the horizon. On February 3, New York members of the House of Representatives Leo Zeldin (R), Elion Engel (I), and Peter King (R) introduced a bill known as HR-5085 with the short title of, “Don’t Break Up the T-Band Act.” As an aside, Peter King was a very early supporter of public safety’s effort to gain access to the D-Block to form what is now FirstNet. (A member of his staff, Ed Parkinson, now the Director of Government Affairs for FirstNet the authority, is being honored by APCO at its Leader’s Dinner. Ed is one of two staffers who helped guide all of us through Congress and helped us identify staffers we needed to spend time with in order to get FirstNet off the ground. His APCO honor is well deserved.) The bill has not moved rapidly in Congress and needs to be pushed by public safety as it pushed for the D-Block. The International Association of Fire Chiefs (IAFC), NPSTC, and leaders from many of the T-Band metro areas are trying their best to move this bill through committee and then to a vote.

Several FCC Commissioners (unfortunately those in the minority and one who recently left the FCC) understand that the looming issues of spectrum interference and funding assumptions need technical expertise in D.C., a capability in short supply at the moment. Those offering advice, in most cases, already have an agenda and there does not seem to be much in the way of expertise left inside the FCC or if there is, it is not being provided to the commissioners in charge. The spectrum war boils down like this:

As I was writing this week’s Public Safety Advocate, my Google Alert for FirstNet sent an item from a web-blog called “telecompetitor” that claims Verizon and AT&T have made a deal for interoperable communications between their networks. I guess we have to suffer fake news even as it relates to FirstNet! This story is not true and, in fact, it appears to be wishful thinking on Verizon’s part. I have been told by FirstNet (built by AT&T) that this blog is not correct and that AT&T has not and will not authorize Verizon to cross-connect with FirstNet nor will AT&T connect Verizon customers to the FirstNet core. As has been stated in meetings held in multiple states, if a public safety agency desires to become a FirstNet broadband user agency, it will be only on the FirstNet (AT&T) network, which will provide the only access to the FirstNet core.

It appears that Verizon is trying to pressure some states into putting pressure on FirstNet, but this is well after the fact and FirstNet remains the purview of the FirstNet Authority and FirstNet (built by AT&T). Later in the article the blog writer appears to be correct in stating that devices, today, have a single SIM and that SIM is associated with EITHERFirstNet or Verizon. Still, the blog is misleading and has been refuted by AT&T.

PSA Opting Out of FirstNet