The past several weeks have seen some interesting changes in the FirstNet Board of Directors and the U.S. Senate. First and foremost, the passing of John McCain was very sad news for many. I am not sure how many within the public safety community know how involved Senator McCain was in the early days of forming FirstNet or how much he supported the public safety community. On the FirstNet Authority side, we lost (due to retirement) our great board chair person Sue Swenson, vice-chair Chief (Ret.) Johnson, and “Mr. EMS”Kevin McGinnis. This leaves a gaping hole in the board with seven vacant chairs to be filled.

In July of 2010, three U.S. Senators announced they were joining the fight mounted by the public safety community to gain access to the 700-MHz D Block. These three were John McCain, Joe Lieberman, and Senate Commerce Chairman Jay Rockefeller. Until then, support from the Senate for the public safety requests was limited. Then on July 21, 2010, Senators McCain and Lieberman introduced a bill (S.3625) to allocate the spectrum known as the D Block to public safety and provide up to $5.5 billion in funding followed by another $5.5 billion as the network was built.

As this bill was being launched, the Public Safety Spectrum Trust, headed by Chief (Ret.) Harlin McEwen, the Public Safety Alliance (PSA), and other dedicated supporters were walking the halls of Congress to drum up bipartisan support for the plan. The PSA held a rally outside the capital building on a very hot, muggy day. Officials from fire, police, EMS, and sheriffs who participated wore their dress uniforms, which are not designed for standing for hours in the hot sun. Both Senator McCain and Senator Lieberman joined us for the event wearing suits and both spoke about their bill and how it was taking too long after the 9/11 report and recommendations, how they both supported public safety, and what they were trying to accomplish. 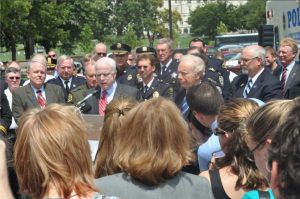 Representative Peter King and Senator Jay Rockefeller followed up with their own bills as support for the public safety cause gained momentum. The final victory, you might remember, is referred to as Title VI of the Middle-Class Tax Relief Bill of 2012 signed into law on February 22, 2012, marking the start of FirstNet, known today as “FirstNet the Authority” since “FirstNet” is the network being built and managed by AT&T. According to the law, the FirstNet board of directors is made up of fifteen people. There are three permanent members of the board, each representing the Secretary of Homeland Security, the Attorney General, and the Director of the Office of Management and Budget. The other twelve members serve three-year terms that are staggered and selected by the Secretary of Commerce to have “public safety, technical network and/or financial expertise.”

FirstNet Board of Directors

The first boardh has included one representative each from fire, EMS, police, and sheriff’s organizations since its formation in August of 2012. The fire member was Chief (Ret.) Johnson, police were represented by Assit.  Chief (now retired) Chuck Dowd of NYPD, sheriffs by Sheriff Paul Fitzgerald, and the EMS spot went to Kevin McGinnis. These four members represented  all branches of the public safety community and just as important, each had been involved in the Public Safety Alliance, walking the halls of Congress, and meeting with V.P. Joe Biden and the Federal Communications Commission (FCC) I, among others, also felt it was important that the public safety side of the house be made up of some of the many who had worked so tirelessly to obtain the D Block and funding. They knew how important the next steps would be, they believed in what was to become FirstNet, and understood why FirstNet was needed. Further, they brought with them the history of FirstNet and the experience of the long uphill battle to convince the powers that be of what was needed and why.

During the first year of FirstNet’s existence there was no staff, no budget, and no way to bring employees on in a timely manner, so the FirstNet board relied on two different strategies. The first was that some board members themselves signed up for tasks that needed to be done and the second was they hired a number of consultants, most of whom were already known to some board members from previous lives. This in turn created new issues for the board when cronyism was brought to the forefront and there were reports that some consultants were billing an incredible number of hours each month. One board member raised issues about the board in a not very diplomatic way. Instead of the board taking his comments under advisement, some members felt their reputations were being impinged. The National Telecommunications and Information Administration (NTIA) responded in a typical DC fashion and fired all of the contractors, some board members left, and others were ready to leave.

It took the NTIA almost a full year to restart FirstNet and return people to work and it took more time for the reconstituted board to turn back to business. FirstNet was finally permitted to hire people to do most of the work, but they rehired a few contactors and others. During this period of time, the public safety community was unsure of what FirstNet was, if it would survive, and if so, what the network would look like. It took the new Chair, Sue Swenson, along with Chief Johnson and Kevin McGinnis, to slowly right the ship. Then work began in earnest, staff was hired, outreach was initiated, and the public safety community took a measured wait and see attitude. One important idea the new Chair implemented was the inclusion of the Public Safety Advisory Council (PSAC) at board meetings. New hires were up to the task and spent a lot of time convincing public safety that FirstNet was about them and no one else and that it would not turn into just another commercial network as many feared.

Over the last few years there have been some board changes. Several members dropped out due to what they perceived to be upcoming conflicts of interest, new members were appointed by the Department of Commerce (NTIA), and FirstNet was gaining ground each month. It did not take long to release an initial Request for Proposal for comments. As a result of this preliminary work, the RFP was changed in a few ways. First and most important, it originally allowed something of a “network of networks” concept as well as a “winner takes all” model. This was changed to a single bidder for the entire network. Other changes included that the network would be more secure, there would and could be only one Network Core, and some changes encouraged out-of-the box thinking.

The RFP was not filled with specifications about radios and devices, instead it called on bidders to propose the best way to accomplish the goals. There were three bidders. One was cut fairly early on, another was cut toward the end and took FirstNet to court. After the court upheld the process, the award went to AT&T. This turned out to be great for public safety because instead of a vendor building out only Band 14 over five or more years, AT&T began offering all its LTE spectrum from day one. AT&T offered up an “instant” FirstNet with full pre-emption, adding Band 14 over time as well as upgrading portions of the network to 5G.

During this time the board kept its eyes on two things. The reason FirstNet was created in the first place was to provide nationwide video and data interoperability services. The board learned about the differences between running a commercial network and a public safety network by listening to the public safety board members, the Public Safety Advisory Council, and others. The board that was in place while all this was happening was overseeing a very important public/private partnership, perhaps the largest such endeavor the federal government has ever undertaken. With board oversight, a dedicated FirstNet Authority staff and, frankly, the AT&T folks who had been with us from the beginning to the bid award and were already well known and respected by the public safety community, FirstNet is real and growing more real by the day.

This brings me to my concerns for the FirstNet Authority going forward. I am old school and believe we need some people who have devoted much of their lives to this project and have the depth of knowledge necessary to make sure FirstNet the Authority and FirstNet (Built by AT&T) stay on course. I honestly hope that instead of who is owed what political favor inside the beltway, some sound choices are made. If I was one of those making the decisions, I would be tempted to convene a meeting of the Public Safety Advisory Council and some FirstNet employees to discuss the choices to fill these seven board posts.

I am concerned about the possibility that we might end up with a board made up of people while fully qualified to be board members do not have the one thing that has made FirstNet stand out for these many years—its board members, staff, and the winning bidder all know how vitally important this network is to the future of public safety. We are also reaching some pivotal points that will need to be reviewed by the new board. Among those is how, exactly, to solve the push-to-talk compatibility issues including the lack of simplex or talk-around on LTE. This will not be resolved by the 3GPP and others declaring it so. It will be resolved when the public safety community says it is ready to embrace these technologies and trust their lives to them. I hope the new board will respect the differences between FirstNet and a commercial cellular network and it will be a board like the one we are losing where some have been directly involved in fire, police, and EMS activities and know how vital communications are.

There are many dedicated people out there and I am hopeful that the Department of Commerce and NTIA will reach out for advice before simply plucking names from a list of people in line for favors for contributing funds or working for a particular political party. The one thing that stands out to me more than anything else is that when the Public Safety Alliance (PSA) came together it came together—Police, fire, sheriffs, EMS, governors, mayors, and vendors. When we met to discuss our our strategy there was some joking about cops and fire fighters not getting along all the time, but when a group of uniformed fire, law, and EMS personnel entered the office of a House member or a Senator, it was the public safety community speaking with one voice. That voice needs to be heard by the new board.

Why the Rush to Voice over LTE?

Be the first to comment on "Public Safety Advocate: Passing the Baton"