A number of people within the various states and the public safety community are not happy with the coverage AT&T/FirstNet is offering on day one. Perhaps if they had a better understanding of the concept that the RFP could have been won by a company that would build out only FirstNet Band 14 and that the network might have been built out as a greenfield (totally new) network, they would better understand the difference between the network that is available today and network that could have been three to five years away in their area.

Sometimes we need to reflect on the past and remind those who have come to both embrace and complain about FirstNet of the original dreams and aspirations of those involved in this journey for eleven years or more. During the activities that resulted in Congressional approval and President Obama’s signature allocating the 10 MHz of spectrum referred to as the D Block and creating FirstNet, there were many discussions among those involved. At first the discussion was about the type of network or networks needed. Some favored a “network of networks,” that is, a number of different networks, perhaps state-by-state or by dividing the country into thirds. However, the consensus was that a single nationwide network would be the best approach and the focus shifted to that goal.

Other discussions were held among members of the Public Safety Alliance (PSA) and the Public Safety Spectrum Trust (PSST) that held the license for the original 10 MHz of 700-MHz spectrum the FCC had allocated for a public safety broadband network. After FirstNet was formed, some on the FirstNet board showed a diagram outlining a plan where each and every device on FirstNet spectrum would also be able to seamlessly roam across all the commercial broadband networks as well as FirstNet spectrum. This, we were assured, would provide the best way to achieve a true mission-critical system. As you might imagine, the public safety community reacted in a negative manner and over time this idea was scrapped. Next, after FirstNet regrouped and was to go to bid for both the one-network approach and essentially a network-of-networks concept. Fortunately, FirstNet listened and the RFP was issued calling for a single, nationwide network.

The other side of this is that I don’t believe anyone in FirstNet or the public safety community envisioned anything but an all-FirstNet, Band 14 greenfield network built out over the course of five or more years. Public Safety knew building a network of this magnitude would take time and the RFP carefully set out milestones for how fast it would be built. This was in keeping with how all the broadband carriers built their networks over the years, starting with their analog or 1G network and progressing to today’s 4G LTE networks. However, all this changed when it was announced that the RFP winner, AT&T, had pledged priority and, more importantly, pre-emptive priority on all its existing LTE spectrum across the nation and in the territories. As beneficial as it was, this change created its own set of issues. 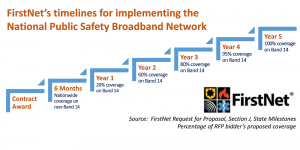 The best way to state the issues that have become paramount in a number of discussions is that in some areas today there are other networks that may, in fact, have better coverage or perceived coverage. This has led to complaints from many within the public safety community and vendors. Unfortunately, to make matters worse, AT&T miss-spoke at a Senate hearing when it stated that Band 14 would only be built out where AT&T needed it for capacity. This was followed by another AT&T miss-statement that it did not know about public safety grade or the work the National Public Safety Telecommunications Council (NPSTC) and the Association of Public-Safety Communications Officials-International (APCO) had done to address this issue nor the fact that the finished document had been submitted to the FirstNet Public Safety Advisory Committee (PSAC) and forwarded on to FirstNet.

At this point, people started pointing fingers, other network operators started talking about building a competing network, and there were a lot of unhappy people. Since then, AT&T has corrected both of these statements and has pledged to provide both public safety grade and Band 14 in the FirstNet network. The issue that has not been resolved for some of the states or the public safety community is coverage AT&T has shown to the states indicating coverage today and over the course of the five-year build-out. What is missing from this discussion is the realization that if AT&T or some other bidder had won and NOT included its own commercial LTE spectrum, the network roll-out would have been much slower and unavailable in many parts of the United States and its territories for three to five years.

What AT&T has offered should be considered a “starter kit” which, in fact, covers a lot of the United States and people who live here. This is the starting point and you should compare it to the starting point FirstNet and the public safety community had envisioned, which would have been equal to no network on day one, and a network built out over at least five years. At least five years simply because the RFP winner would have had to arrange for tower space, fiber, and other services that are already up and running within the AT&T network. In the case of a Band 14-only network, there would have been delays in obtaining permits across the nation, in taking fiber to the sites to be used, and many other factors that would not have been the fault of the vendor but simply a normal part of a greenfield build.

The difference between what public safety has been given as a starting point for the network and what was expected are vastly different and for the better. Perhaps those who only recently found out about FirstNet need to be made aware of history and how leaders of the public safety community viewed the network’s progression from day one to the end of year five. Compare that day one with where they are actually starting. Many public safety agencies will begin taking advantage of priory network access as soon as they sign on and after the first of the year, full pre-emptive access to AT&T’s existing network. Frankly, I think more will be encouraged to use the network faster than if we had to wait for a Band 14-only network.

There are those, I am sure, who will point to the RFP and the section that deals with a Mobile Virtual Network Operator (MVNO) to be set up by the winning bidder to bring public safety onboard sooner. However, an MVNO-type of operation would not have included pre-emptive or even priority access during the startup phase of the project. Yes, in some areas AT&T needs to improve its coverage and it is committed to doing that. Yes, there is another network operator trying to take advantage of the differences in coverage. However, over time, as the AT&T/FirstNet system is deployed, I believe agencies will move over to FirstNet to be able to experience the advantages for which the network was conceived, that is, to provide a fully interoperable nationwide platform for the first responder community.

What was originally envisioned was a network built from the ground up using the 20 MHz of spectrum licensed by the FCC to FirstNet. What we see instead is a network provider that has been working with the public safety community long before FirstNet, that knows how important it is to quickly put the network into operation, with a game plan that took us all by surprise. I think you should put what we expected and what we are getting in perspective. AT&T does have work to do on improving coverage and deploying Band 14, but the other option would have been for many agencies to sit and wait even longer before having access to a pre-emptive and interoperable network.

Be the first to comment on "Public Safety Advocate: FirstNet Only Better!"