“As wildfires across the state impact our communities and our hometowns, it’s critical that we support the efforts of the men and women protecting Montana with all resources available.” 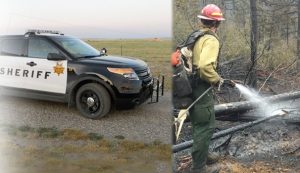 RESTON, Va., Aug. 7, 2017 – Montana is moving to advance first responder communications. Today, Governor Steve Bullock announced his decision to accept the FirstNet and AT&T* plan to deliver a wireless broadband network to the state’s public safety community. This will make Montana the 12th state or territory to “opt-in” to FirstNet and bring advanced technologies that will help first responders save lives and protect communities.

“This partnership will allow us to provide our first responders increased capabilities to communicate effectively with the public as quickly as possible,” said Governor Bullock. “As wildfires across the state impact our communities and our hometowns, it’s critical that we support the efforts of the men and women protecting Montana with all resources available.”

AT&T, in a public private partnership with FirstNet, will build, operate and maintain a highly secure wireless broadband communications network for Montana’s public safety community at no cost to the state for the next 25 years. The FirstNet network will drive innovation and create an entire system of modernized devices, apps and tools for first responders.

By opting in, Governor Bullock is making one of the most economical and technologically advanced decisions for the state’s first responders and the residents they serve. The FirstNet network will transform the way Montana’s fire, police, EMS and other public safety personnel communicate and share information. Specifically, FirstNet and AT&T will:

Connect first responder subscribers to the critical information they need in a highly secure manner when handling day-to-day operations, responding to emergencies and supporting large events, like the annual Evil Knievel Days celebration in Butte or the International Wildlife Film Festival.
Create an efficient communications experience for public safety personnel in agencies and jurisdictions across the state during natural disasters. This includes the 2012 wildfires that burned 1.1 million acres across the state, the Lodgepole Complex Fire and the Liberty Fire near Arlee, which has tripled in size during the past few days.
Enhance network coverage across Montana’s topographically diverse landscape, benefitting first responders and residents throughout the state’s rural and tribal areas.
Provide first responders with access to dedicated network deployable assets for additional coverage and support when needed.
Drive infrastructure investments and create jobs across the state.
Usher in a new wave of innovation that first responders can depend on. This will create an ever-evolving set of life-saving tools for public safety, including public safety apps, specialized devices and Internet of Things technologies. It also carries the potential for future integration with NextGen 9-1-1 networks and Smart Cities’ infrastructure.
FirstNet and AT&T designed Montana’s network solution with direct input from the state’s public safety community. This was facilitated through the Statewide Interoperability Governing Board, designated through executive order by Governor Bullock. FirstNet has been meeting with Montana’s officials and public safety personnel for several years to address their unique communication needs. This includes:

Expanding coverage in rural and tribal areas, where many Montanans reside.
Enabling state, local, tribal and federal agencies to effectively communicate and coordinate along the border.
Increasing capacity during emergencies and natural disasters through the use of deployables.
“Governor Bullock’s decision to join FirstNet demonstrates Montana’s strong commitment to public safety,” said FirstNet CEO Mike Poth. “With this decision, Montana is putting 21st-century, lifesaving tools in the hands of the state’s first responders, bringing a modern, broadband platform to public safety across the state – including over rural, mountainous and remote locales. FirstNet looks forward to continuing to work with Montana to equip the state’s first responders with this vital technology, which will help them in their mission to save lives and keep Montana’s communities safe.”

The decision enables FirstNet and AT&T to begin creating an entirely new wireless ecosystem for public safety communications. Montana’s first responder subscribers will have immediate access to quality of service and priority to voice and data across the existing nationwide AT&T LTE network.

“We’re honored to bring FirstNet to Montana,” said Chris Sambar, senior vice president, AT&T – FirstNet. “This is a major step forward for the state’s public safety community. By opting in, Governor Bullock is giving his first responders access to the innovative tools and technologies they need to help keep themselves and those they protect safer.”

“FirstNet will give Montana’s first responders access to the critical communications capabilities they need when seconds count and lives hang in the balance,” said Tara Thue, director, AT&T Montana. “AT&T has invested nearly $150 million in our Montana network infrastructure over the past 3 years. With Governor Bullock’s decision to opt-in to FirstNet, Montana will not only be able to expand and enhance communications capabilities for first responders, but the State will also be able to drive additional investment to deliver reliable, high speed wireless connections in areas with little or no connectivity today.”