After nearly a decade of debate, a dedicated public safety cellular network is going online. Here’s how that may affect how you do your job. 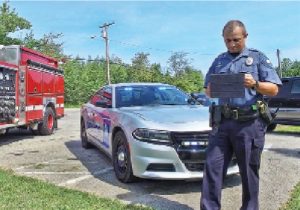 Not every agency is currently positioned to benefit from FirstNet, but that will change as more start issuing smartphones and other such devices to their officers. (Photo: FirstNet)

Shortly after the atrocities of 9/11, reports began to emerge that one of the reasons so many firefighters died in the World Trade Center attack was that police helicopters circling above the scene could not warn them the building was about to collapse. This communication breakdown was well documented in the 9/11 Commission Report, which was released in 2004. And ever since that report was issued interoperability between different agencies has been a major concern for public safety leaders.

What grew out of this concern was a massive initiative to create a cellular communication network just for first responders. And when all of the nation’s television stations were required to transition to digital broadcast signals about a decade ago that freed up radio spectrum in the 700MHz band and triggered a bidding war among cellular providers. It also spurred public safety officials to argue that 20MHz of this precious radio real estate should be reserved specifically for use by first responders.

That’s pretty much the birth of what would become the First Responder Network Authority, although at the time it went by names such as Public Safety Broadband and Band 14. Today, the Authority is known as FirstNet.

Be the first to comment on "FirstNet And The Broadband Future"