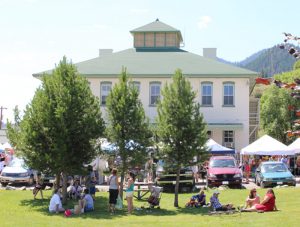 As mayor of Twisp, Ing-Moody has been asked to speak to state conferences and before committees to share the many ways communications failed during the most urgent times, leaving frantic citizens unable to call 911, first responders unable to communicate with dispatch or each other, and community leaders like herself struggling to respond during the disaster.

“During the 2014 breakdown in communications, I couldn’t reach the police chief to initiate Level 2 evacuation, due to the cell towers being overwhelmed — I had to find him in person on the street, then have staff go door-to-door,” Ing-Moody said.

The next year, the Twisp River and the Okanogan Complex fires again demonstrated communications failures, with loss of landlines and problems maintaining communication between Twisp and emergency resources that were stretched thin throughout the county.

“Since that time this has been a passion of mine — to ensure we are in a better position in emergencies,” Ing-Moody said.

Last week, she hosted a meeting at Twisp Town Hall focused on a national initiative to improve emergency communications through a program called the First Responder Network Authority, or “FirstNet.”

Established by Congress to deliver a nationwide wireless broadband network dedicated to public safety, FirstNet is the result of the 9/11 Commission report, which identified gaps in emergency communications in the wake of the 2001 terrorist attack.

The federal government has contracted with AT&T, the nation’s second-largest cell phone carrier, to build a new wireless network that is designed to give priority to first responders.

That national program has important implications for small, rural communities like the Methow Valley, and Ing-Moody said she wants Twisp and the valley to be well positioned to take advantage of the communications improvements that are promised.

Be the first to comment on "Do They Hear Us Now?"